Last weekend I spent my Saturday at the Portland Women’s Expo, for the second year in a row.   There was somewhere in the neighborhood of 11, 000 women who attended. Hundreds of booths to shop at, and lots of fun.   I always enjoy meeting all the gorgeous ladies who are interested in booking a shoot with me.   I can’t wait to get some of them on my schedule! 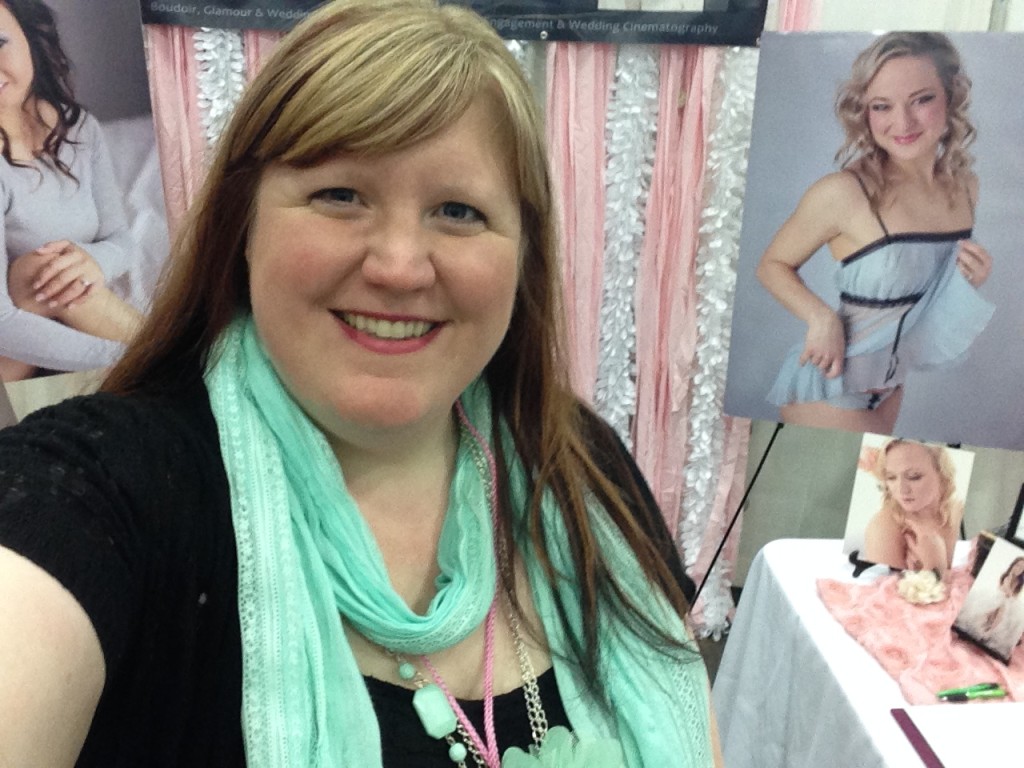 I had a drawing at my booth for 1 pound of See’s candy.   The winner was Kismet from Portland!   Congratulations, Kismet! 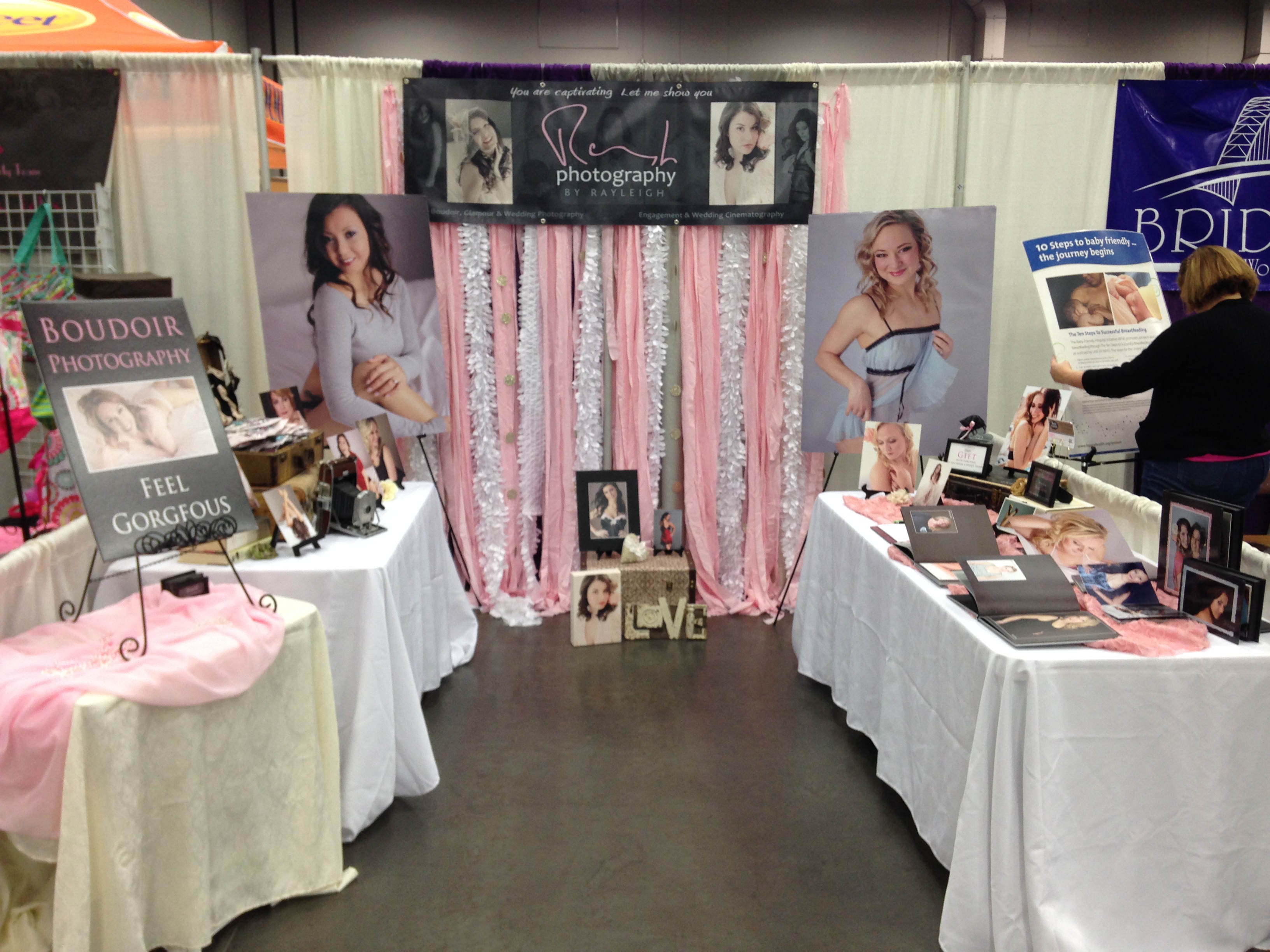 If you are interested in booking your own boudoir or glamour shoot, please contact me.   If you saw me at the expo, let me know!

I spent last weekend in Salem, hosting a booth at the Oregon Wedding Showcase.   I got to meet a ton of excited brides and be part of the hustle and bustle of wedding planning for the happy couples.   I’m looking forward to hearing back from some of them when they are ready to schedule a boudoir shoot which is an amazing gift a bride can give to her groom.

Don’t forget!   Contact me on March 23rd between 9am and 9pm to schedule your glamour or boudoir shoot (for a future date) and receive 60% off your session fee!   Feel free to contact me ahead of time with any questions.

Here is some pricing information.

If you are on a smaller budget, you can do a mini session which is 45 minutes instead of 90.   The sitting fee is $150 ($60 on March 23) and includes the session itself and professional hair and makeup.   My photo collections for the mini shoot range in price from $295-1130.

Unless something changes, this will be the last promotion of this magnitude for the year.   I typically offer this huge promotion right after an event such as a bridal show or expo and I don’t have any more of those planned until next year.   So jump in while the water is warm!

Check out my website for more information about my shoots.   And don’t forget to call or email me on March 23.    Mark your calendar.

Mark your calendars for February 9th!   I’m having a one day only sale.   Call or email me between 9am and 9pm that day and book your glamour or boudoir session to receive 60% off the session fee!   The regular price for the session fee is $150 for a mini session or $195 for a regular session.   Both types of sessions include professional hair and makeup.   Photos are available at regular prices.   I don’t offer sales like this very often so don’t forget to contact me on February 9th!

Mark your calendars!!!   On January 19, 2012 I am hosting a boudoir event at my studio (by appointment).   Ever thought about doing a shoot but weren’t sure if it was your thing or didn’t know if you should spend the money on a full shoot?   This is your chance to get a taste of how much fun a boudoir or glamour shoot can be with a small price commitment.   There are only 10 slots available so contact me soon to grab yours!   How much would your Sweetie love a photo of you for Valentine’s Day?   Here is how it works.

Congratulations, Amy Pruett!   Your photo got the most votes, by far, with 38 votes!   Thank you so much to everyone who voted in the contest.   I thought it was a lot of fun.   Thank you also, to those who commented on the blog post.   Megan Desalvo, you were the winner of the drawing!   Both of you will receive a $50 credit to use toward prints or towards a portrait shoot!   Yay!

Thank you, everyone, for voting and for “liking” my Facebook page!   Congratulations to C.P.!   You got the most “likes” on your photo, with 43 likes!   And Sara Jurgens, you won the drawing by voting and commenting on the blog post!   C.P., you can use your $50 gift certificate to purchase product or toward another shoot.   Sara, you can use your $50 toward a boudoir shoot!

I’ve selected my favorite images from 2011 and now you can vote on your favorite one!   There will be two winners.   The girl with the most votes on her photo will win a $50 gift certificate to be used for an album, prints, or another session.   I will also hold a random drawing for all those who comment on this blog letting me know that you voted and that winner will receive a $50 gift certificate to be used toward a boudoir portrait session.   The gift certificate may be given to a friend.   Here is how to enter:

3. Comment on this blog to let me know  that you voted and tell me, just  for fun,  your favorite part on your body.   This will enter you in to a drawing to win the Gift Certificate.

This promotion is in no way sponsored, endorsed or administered by, or associated with, Facebook.
The participant is providing information to Photography by Rayleigh and not to Facebook.

I’ve been working hard on my studio and I love the way it is turning out so far! My husband and I painted some of the walls to create 4 new backdrops. I don’t have a photo of the BEFORE before. Meaning, with the walls as they were when we moved in. But here is a photo of my first attempt at a makeover. I draped the walls with fabric because I thought it looked better than just a plain old wall. It worked ok. But it wasn’t awesome.

And here is the after photo! We painted the wall behind the bed “bitter chocolate.” We also did some sponge painting for texture. But you can barely tell in this photo that we did that. On the wall to the left of the bed we painted with “Dark Midnight.” It’s a super dark blue with a hint of turquoise. Each wall is intended to be a different backdrop. So they won’t both be used in the same image. This staging area is mostly used for Boudoir photos but can also be used for maternity, newborn, family, and seniors! I also got new sheets, pillows, and the canopy that hangs from the ceiling.

The lighting is horrible in these images. My husband just snapped a few photos of me using the light that was already being used for painting which was some clamp lights with no diffusers. I’m so excited to do some creative stuff with the sheer fabric that hangs from the ceiling! It’s easily removable, too. I don’t intend to use it for all of my images so I can just take it down with no problem. Both walls in this corner are pretty dark. I have some lighter colored backdrops on the opposite wall, including white, to use when I want a lighter look. And for boudoir images, I can use a blow up mattress in front of the white backdrop and that works really well. Because the walls are so dark and not great for light reflectivity, I’ll have to put up reflectors around the room to help with light disbursement. Here are some images taken with the “dark midnight” wall in the background.

On the wall opposite the bed, I hang my backdrops. And I painted the wall behind the hanging backdrops half pink and half blue so that the wall itself can be used as two different backdrops. You can see my backdrops hanging on the left. They slide across and cover the wall when in use.

We aren’t done with our makeover yet. Some future plans include new curtains on the windows, hard wood floors, and at least one other staging area on another wall. The ceiling is currently white but I think we are going to paint it a super high gloss white to help reflect more light. We also plan to paint all the molding white. This weekend I’ll have my first shoot in the newly improved studio! I can’t wait!

Yesterday I had the opportunity to host the weekly meeting for the Tigard Chamber of Commerce.   Part of that is giving a 10 minute presentation to the group of about 40 people about my business.   I told them about my services and my style and my technique.   I was so pleased with how it went!   I was really nervous before my presentation  because public speaking is so not my stong suit!   But once I started talking and I was looking out to all the smiling, supportive faces, I didn’t feel very nervous at all  and I could just be myself.   My awesome client (and now friend), Maryalicia, blessed me so much by coming and giving a really thoughtful testimony.   She also took a few photos of me while I was talking and I wanted to share them with you!

Photography  By Rayleigh:     Tigard and Portland Wedding Photography and Videography