I’m so excited to show off my handmade Christmas tree forest. Now, this really has nothing to do with photography, other than the fact that the trees are used to decorate my home studio. But, hey, everyone loves a good crafting blog, right? 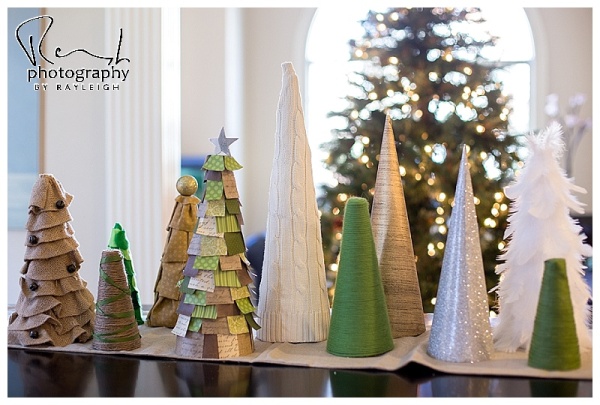 All the cones were made using various sizes of styrofoam cones, like these, that I purchased at Jo-ann Fabric.   It would have been a whole lot cheaper to make cones using cardboard from cereal boxes or poster-board and I did find a pattern for that here on Pinterest. But I decided to go the easier route, by purchasing cones, even though it ended up costing more. 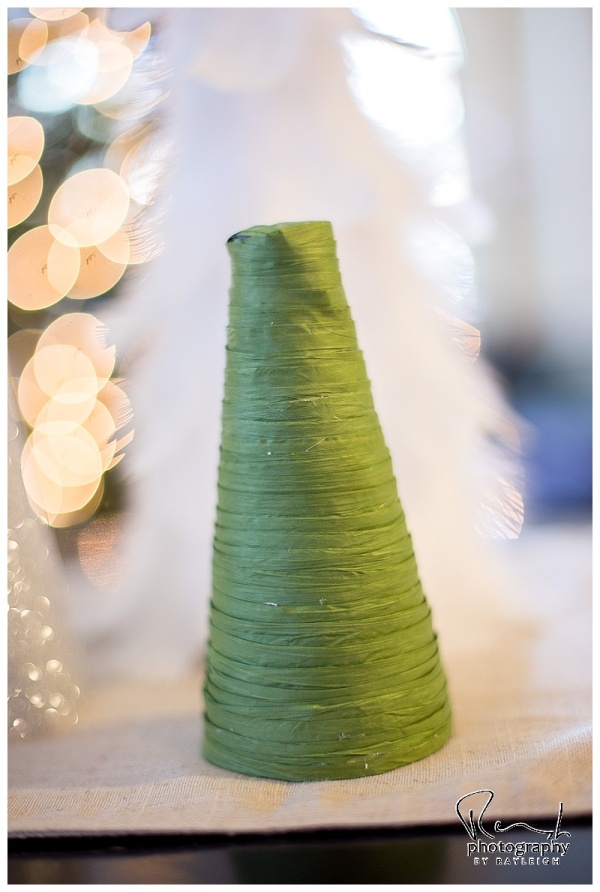 This cone was made using a raffia type ribbon that I found at Michael’s craft store. I used hot glue to secure the ribbon and just wrapped it around and around. I used a good amount of glue at the base and at the tip to make sure it didn’t come undone. Besides that, I just used a small line of hot glue about 2 inches long every few cycles. I started wrapping at the base and before I wrapped the top, I cut a few strips of raffia and layed them across the top (with glue) to cover the top of the cone, then continued to wrap around the sides.   For some reason, the cones don’t come with a pointy tip. I wish they did. But I just left this tree with a rounded tip. if I were to do it again, I might use card stock to make a pointy tip for all the cones. But the rounded tip doesn’t bother me too much. 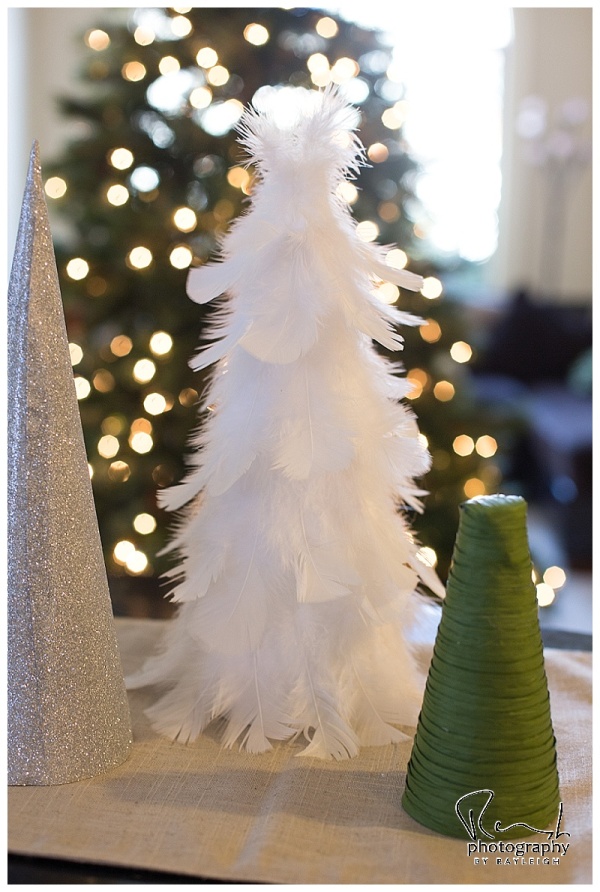 This feather tree is definitely one of my favorites! I had purchased some turkey plumage feathers on Amazon for another craft project so I already had them on hand. The feathers have a natural curve to them. So I just used hot glue to glue the feathers on so that they   curved down and outward. There various sizes of feathers so I used bigger feathers toward the bottom and smaller feathers toward the top. And I used a tiny poofy feather at the very top.   I love it! 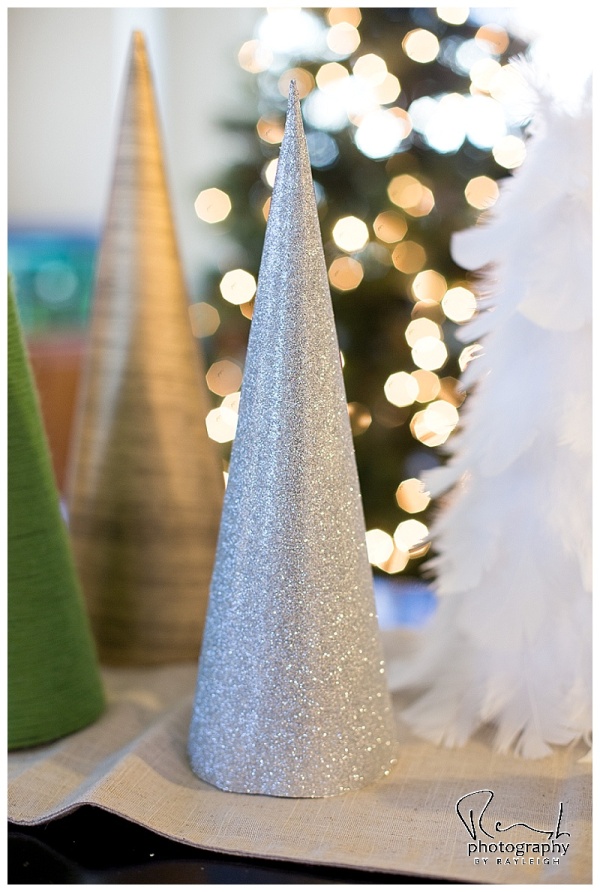 This cone was really easy. I just used some wrapping paper that I got at The Container Store. At $10 a roll, it’s expensive wrapping paper, but oy! The glitter! I couldn’t help myself. But I just use it for crafting because it’s too expensive to waste on gift wrapping. 😉 I had a hard time wrapping the entire cone and making it pointy on top, which I wanted for this cone. So I wrapped the cone, leaving a hole at the top, which was the only way I could wrap it. Then I made a little tiny cone hat with the paper and glued the hat on to the top. Since the paper is glittery, it blends in and you can’t even really tell that it’s not all one piece. 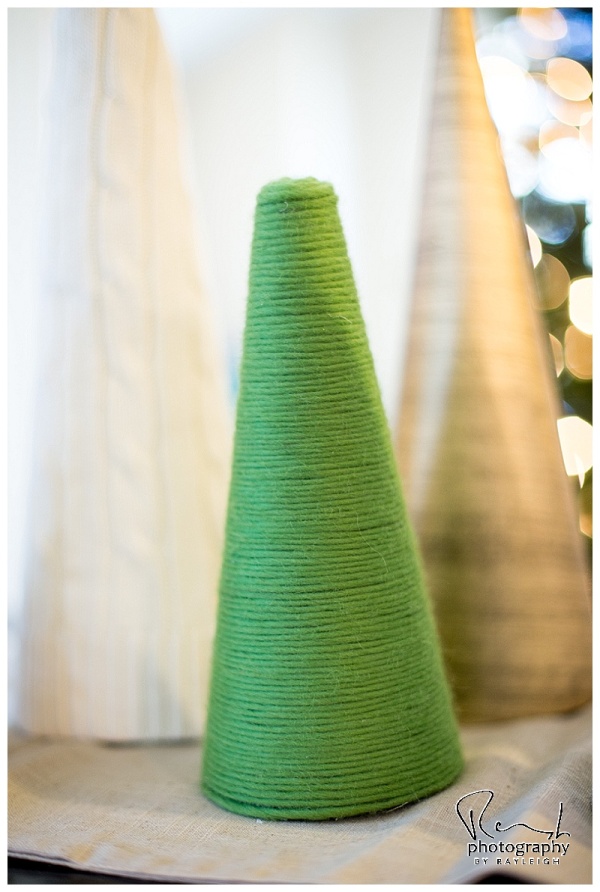 This cone was made exactly like the raffia cone except using a soft yarn. This happens to be my favorite color and I love the softness. 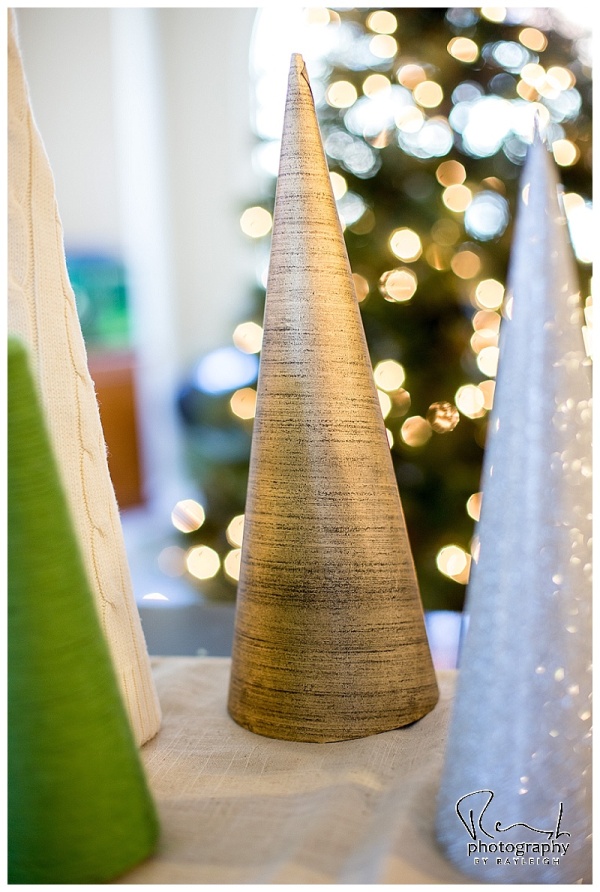 This cone was made exactly like glitter cone, except using a different color of wrapping paper. This wrapping paper I got from the Dollar Tree so it was a lot less expensive. For some reason I had an easier time making the top pointy while wrapping the cone, so I didn’t need to make a little hat, like I did for the glitter cone. Maybe it’s because the paper was thinner? 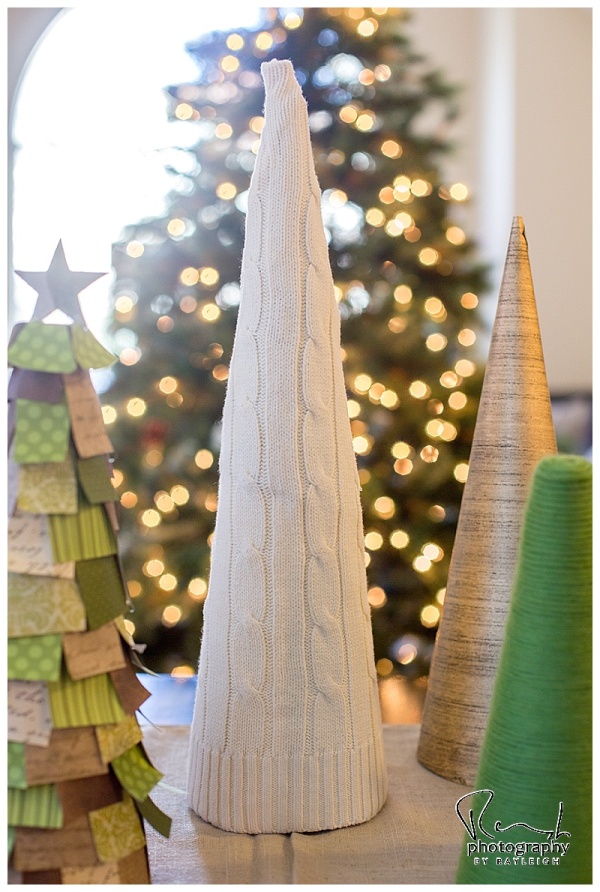 I have a strange obsession with cable knit sweaters as Christmas decoration, so this is probably my favorite cone tree. I bought the sweater at Goodwill and just wrapped it around the cone, attaching it with hot glue. 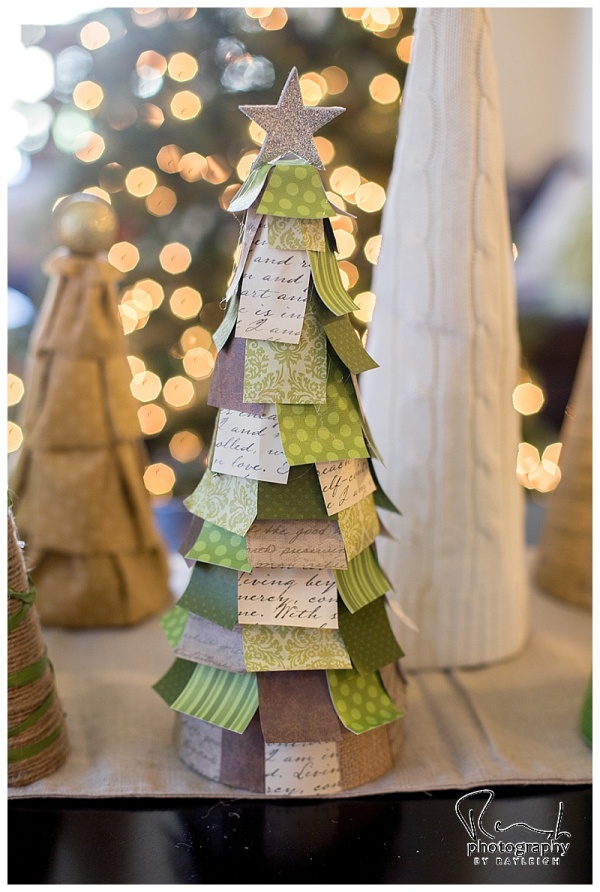 This was probably the most time consuming of the trees. I picked out various papers in greens and browns and cut them in to strips that were about 2 inches wide and 3 inches long. At the base I just glued the paper flat to the cone and I used only brown paper. For the rest of the tree I curled the paper a little bit by wrapping the paper around a pencil. The strips of paper at the very top are a little smaller, just to more easily wrap around the tip of the cone. For the very tip,   I cut a piece of paper in to a circle that could cover the top with some of the circle hanging off. Then I cut notches in it and folded the cut pieces down. The star on top was something I saved from a 4th of July party at my friend’s church. It was silver and glittery so I kept it around and it worked great on top of this tree. It’s not on super securely. I just used some hot glue along the inside edge of the star’s “legs.” If it falls off at some point, I’ll just glue it again! 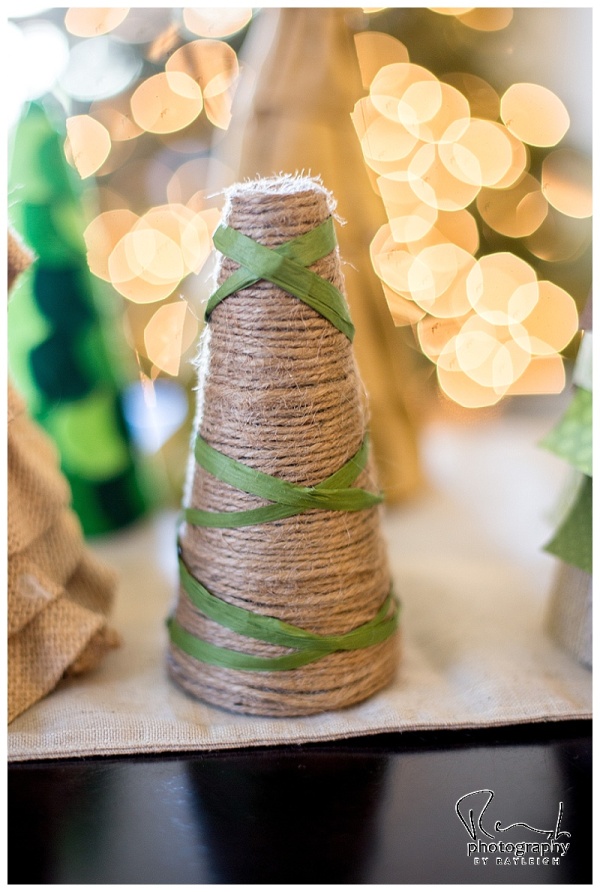 This cone is just like the raffia cone and the yarn cone, except I used twine. Then I used some of the raffia ribbon to make a criss-cross pattern. 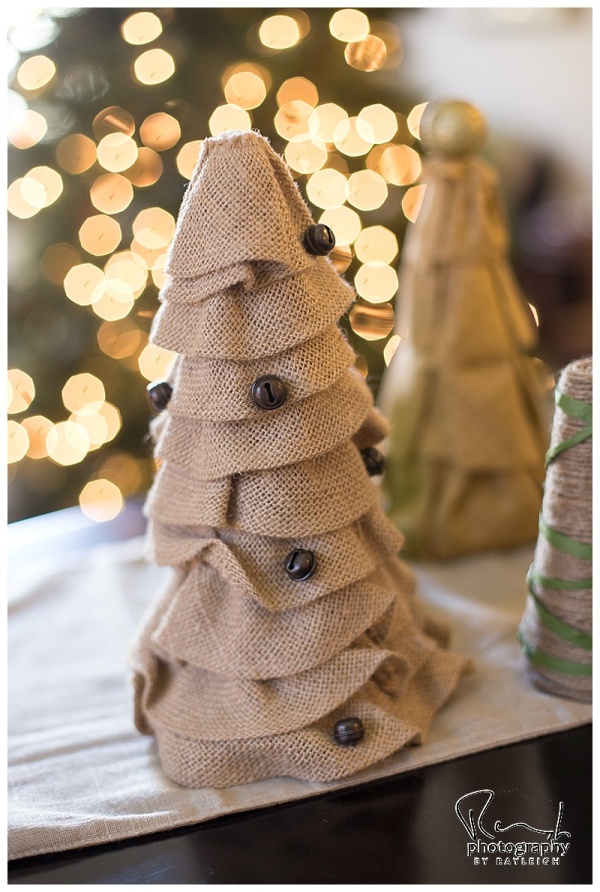 This tree, I didn’t actually make. I bought it on clearance at Real Deals. (A super fun and dangerous store for me!) It was on clearance because it used to have a star on the top that had fallen off and got lost. So I need to find a topper for it. I’m trying to find a medium sized bell, to match the other bells, for the top. The tree had a pole stand that it was perched on, but I took the pole off so that this tree would match the rest of the trees. This tree would be pretty easy to make if someone wanted to make one like this. 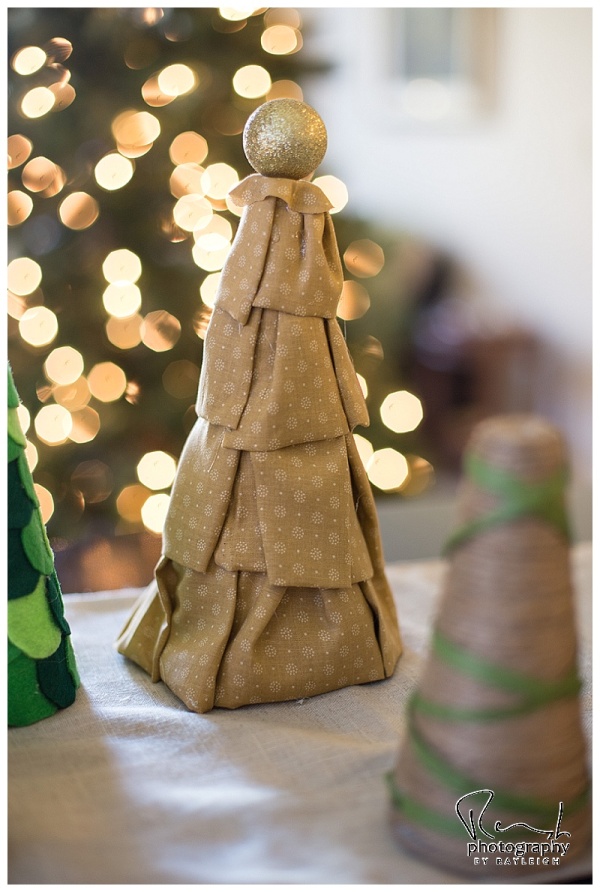 I’m not thrilled with this tree. For one thing, I accidentally photographed the back of it, where the fabric met, and it looks slightly better on the other side, lol.   But still, I’m not sure what it is that I don’t like about it.   It’s just not my favorite. I just cut strips of fabric and folded them over, in half, so the bottom was folded instead of a cut edge. And I hot glued the strips to the cone, bunching it together a little to make ruffles. The top is a Christmas ornament I stole off my studio’s tree. 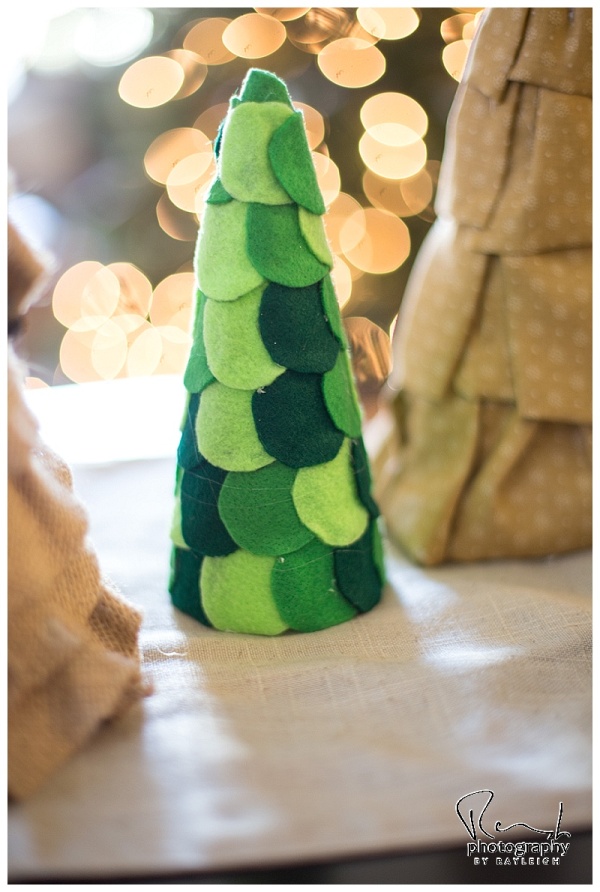 I love the concept of this tree. I just wasn’t thrilled with my options for shades of green. They don’t really match the other greens as well as I wanted. But it’s still cute. I just cut circles out of felt and glued them on in layers. For the top I just folded up a piece of felt to look like a point.

There are so many cute ideas on Pinterest for cone trees. It was hard to narrow done the ones I wanted to make. But I have a ton of them saved to my Pinterest board and you can take a look at it to get more ideas!

I hope you enjoyed my blog!