How to Decoupage and Antique a Dresser.

I have to start out by saying, I am by no means an expert in furniture or furniture art. But, I managed to decoupage and paint a dresser with an antique look all by my little ol’ self, (okay my Dad helped a little) and I think it turned out pretty great, if I do say so myself!   I wanted to share how I did it so that you can see how easy it is. The dresser is now used as my hair and makeup station in my photography studio and I can use it as shooting space as well.   I’ve used it a couple of times for photos and I think it looks so cute.   I’ll give you a step by step recap of how I decoupaged and painted the dresser. 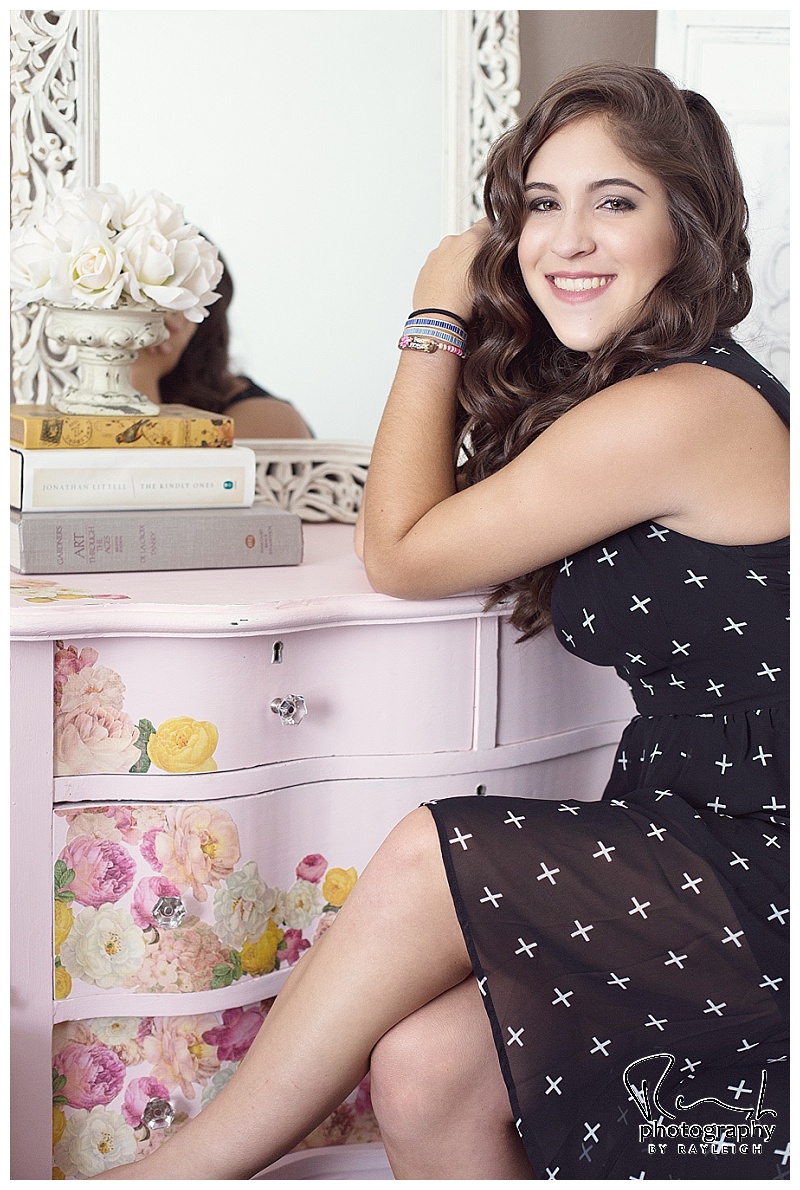 The dresser is actually an antique to start with.   My Dear ol’ Dad found it at a garage sale for $10.   It was kind of in bad shape and needed some repairs.   So my Dad added a wood panel to a weak side and filled in some chipped wood with putty.   I can’t explain how to do that part.   He’s just good with wood and furniture.   But hopefully the furniture you are working with is in better shape to start out with. 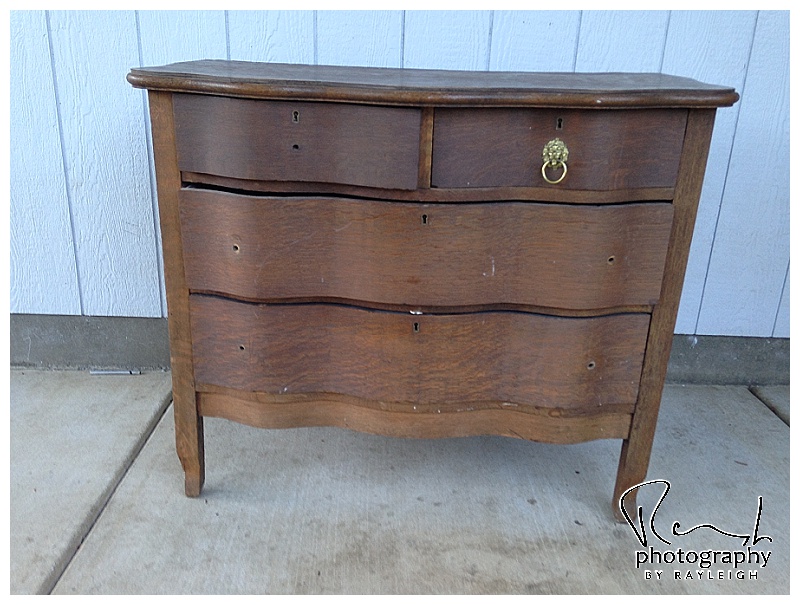 My Dad also removed the hardware (there was only one ring handle left on it) and sprayed the dresser with spray on primer so that it would hold the paint better.   He accidentally got some on the cute little key holes so he just sanded the metal part of the key hole to get the primer off. 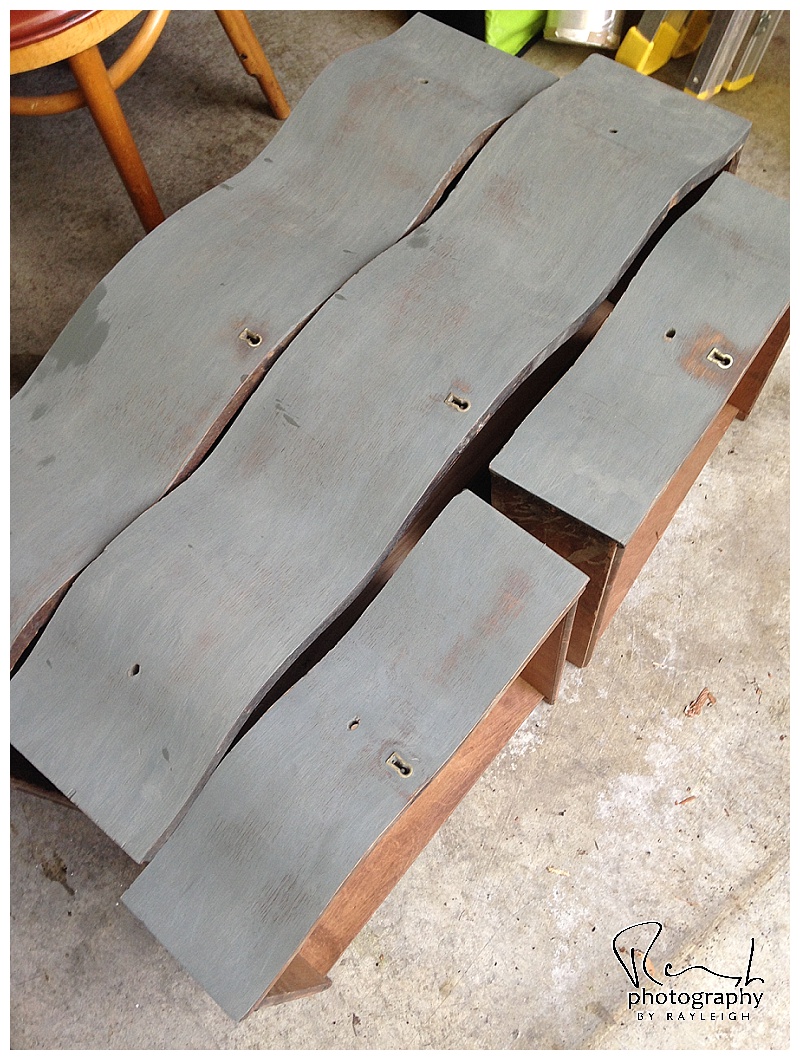 Then I painted the dresser with two coats of white paint using a bristle paint brush.   In hindsight I might have preferred to use a sponge brush to avoid brush strokes but I still think it looks fine anyway.   I didn’t want a super bright white.   I wanted a more antique white.   So I chose Behr brand and the color is Angel Food in flat matte.   This particular brand of paint has primer in it so the previous step where we sprayed on primer may have been unnecessary, but I just wanted to be sure I had a full coverage. 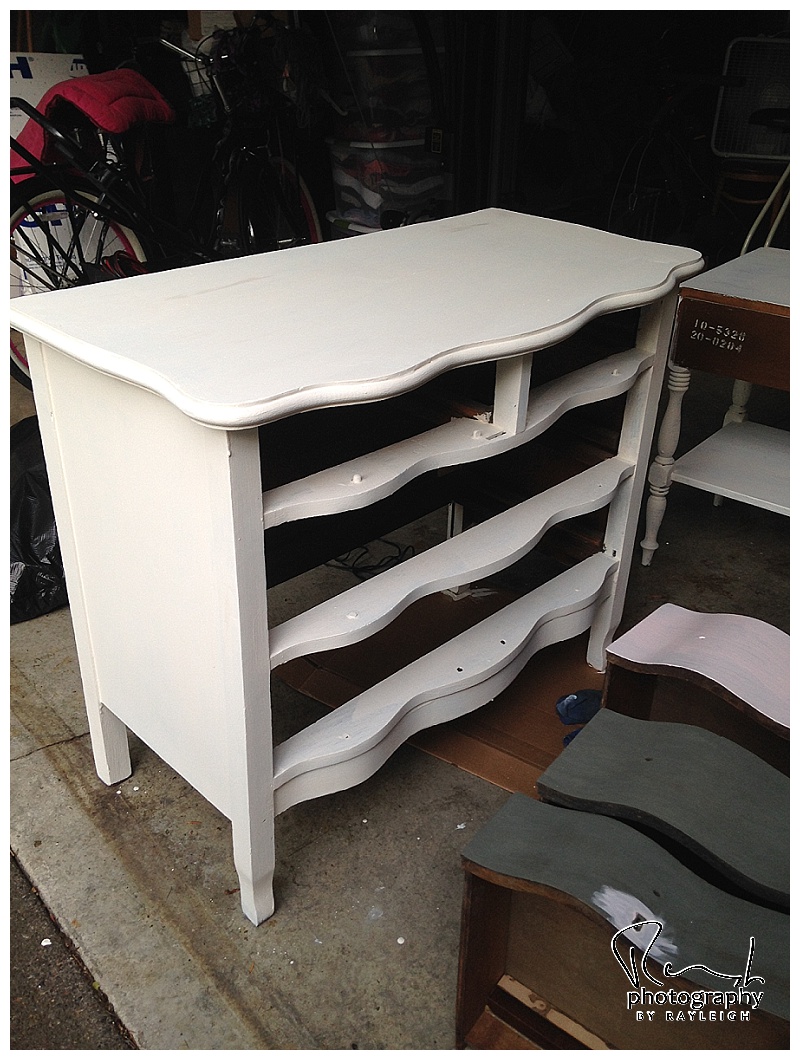 Then I painted over the white with a very light pink. (in this photo you can barely tell it’s pink, but trust me, it is)   I chose Behr brand again and the color is Hawaiian Shell in flat matte. 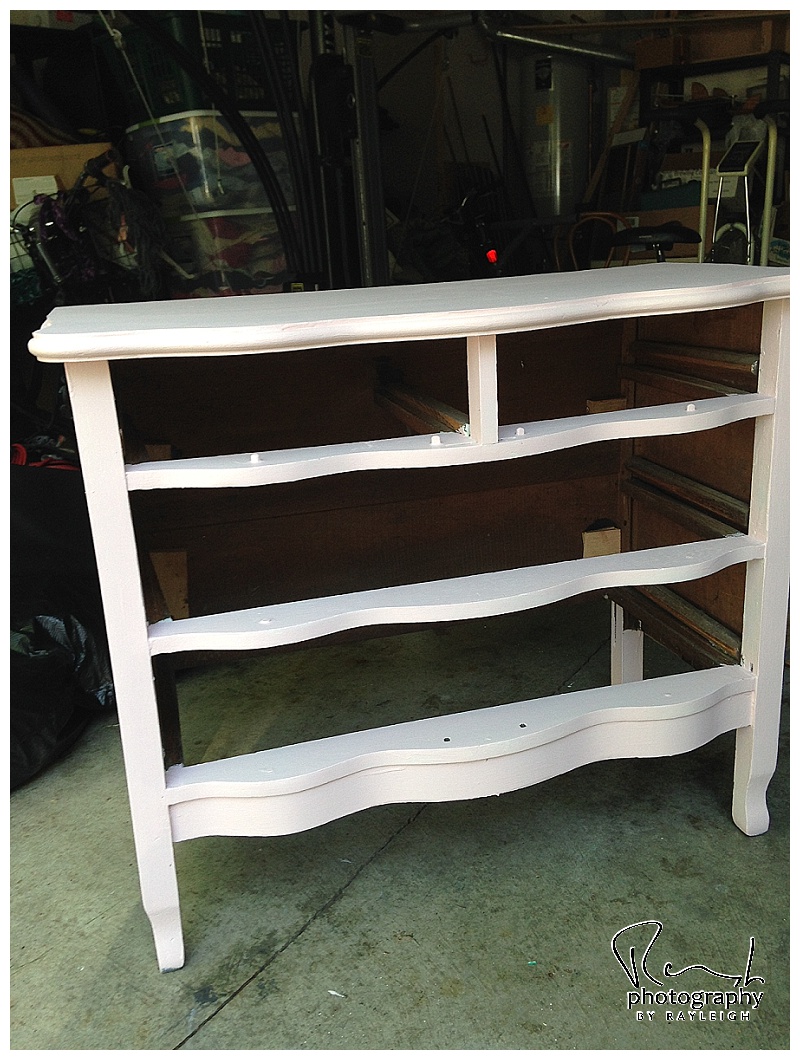 Then I took sandpaper and started sanding the pink paint in areas that would normally get worn over time, like corners and edges.   First I used a fine grit sandpaper sponge, like this one from Home Depot.   I can’t find the exact one I used on their website but the one I used said it was 400 grit.   I liked the sponge because it’s flexible and easy to use around corners.   The idea is to sand off the pink paint to allow the white to show through, only in spots where you want it to look worn.   This gives it an antique feel.   Originally I was going to leave it at that, but there was a spot where I accidentally sanded too much and the gray primer showed through.   I really liked it so I grabbed a more course piece of sandpaper that we had in our garage, 120 grit, and sanded some small areas to reveal the gray.   My husband thinks I should have left it pink and white and not sanded farther down to reveal the gray.   But tell me in the comments what you think.   I could always slap on more paint to those areas and redo the sanding.   Again, it’s hard to tell the difference between the white and the pink in my photos. But hopefully you can see what I’m talking about.   This technique would probably be more noticeable if you use colors that have more contrast, like white and blue. 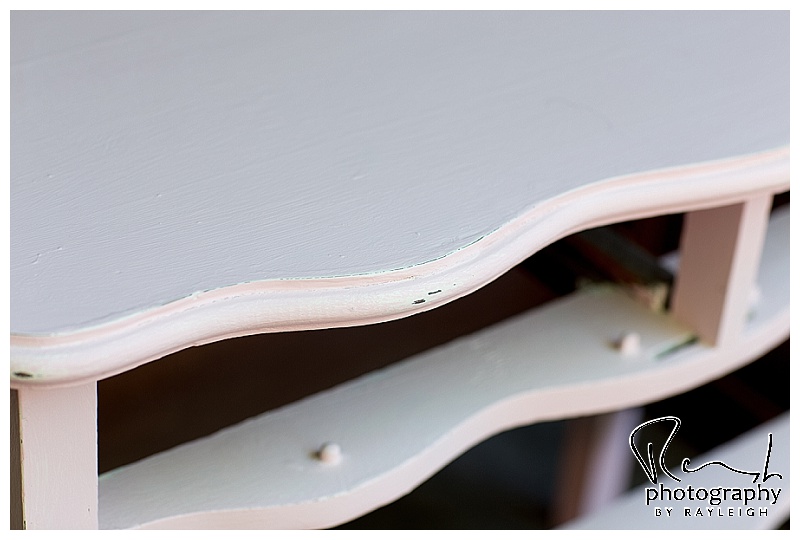 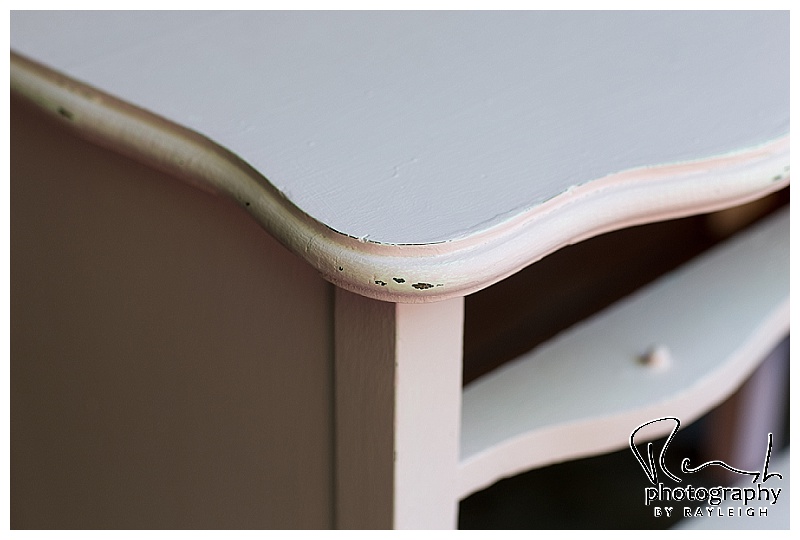 Then I went to Michael’s and bought some floral scrapbook paper and Mod Podge glue. There were a few options to choose from for the Mod Podge but I chose Furniture Matte. (Glossy was one of the other options)   I cut out the flowers with a pair of sharp scissors.   Yes, it was extremely tedious.   But I just stuck a movie in the DVD player and got to it.   The paper I chose had some clumps of flowers so I didn’t have to cut every single flower out individually.   But it was still a lot of cutting, just to cut out the background.

Before gluing the flowers, I first placed them in a pattern that I liked and stuck them on with tape.   I folded a piece of Scotch tape and stuck it to the back of the flower so that I didn’t ruin the front of the flower with tape. The photo below shows the flowers as they were just taped on. Once I was satisfied with the location of the flowers, I removed the tape from each piece of paper and glued the flowers to the dresser using the Mod Podge glue and a small sponge brush.   I followed the directions on the Mod Podge glue which told me to first put glue on the back of the flowers to stick them to the dresser and let it dry for a couple of hours.   Then apply a layer of glue over the top of the flowers, covering the entire piece of furniture and let it dry for a couple of hours.   You can add as many layers of glue as you want and the more layers you add, the more of a plastic, glassy, look you’ll get.   But I only did two layers since I wasn’t going for thickness or that super decoupaged look.   Since I covered the entire dresser with glue, the added benefit is that it added stability to the sanded paint. 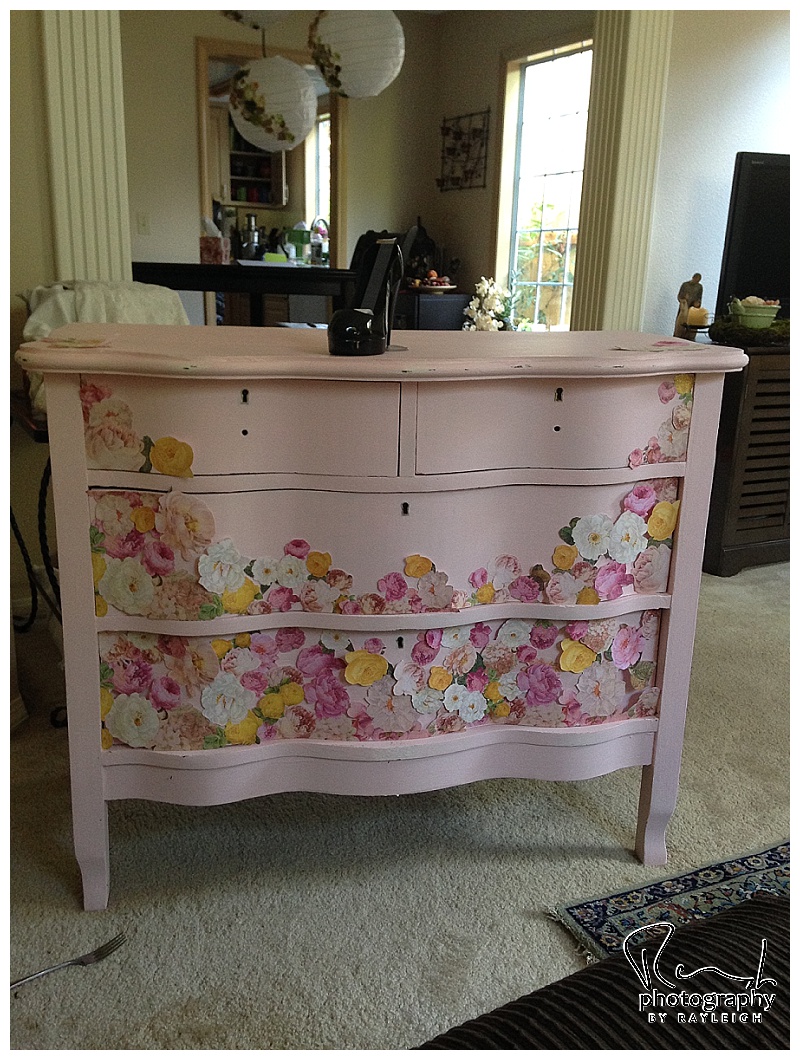 After all the glue dried, I added knobs that I picked out from Home Depot. I chose glass knobs that looked antique to me.   After adding the knobs, I see why the original piece had ring pulls instead of knobs.   Because of the wavy design, the top two knobs end up pointing inward and the bottom four knobs end up pointing outward.   It looks a little funny.   But not so much that it really bothers me. 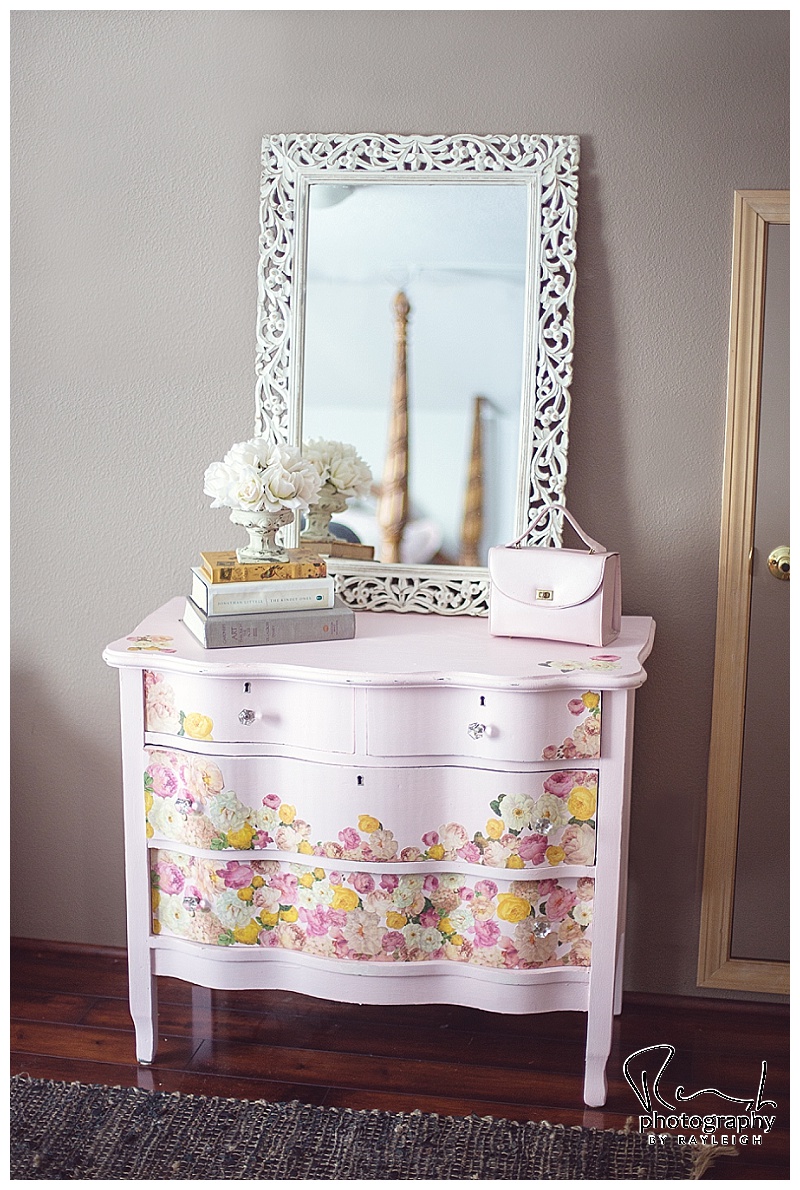 And that’s that!   Easy-peasy.   I’m looking for a second dresser that has a similar look to this one so I can have a second hair and makeup station in my studio.   So if you are local to the Portland, Oregon area and you find one, let me know!!   🙂 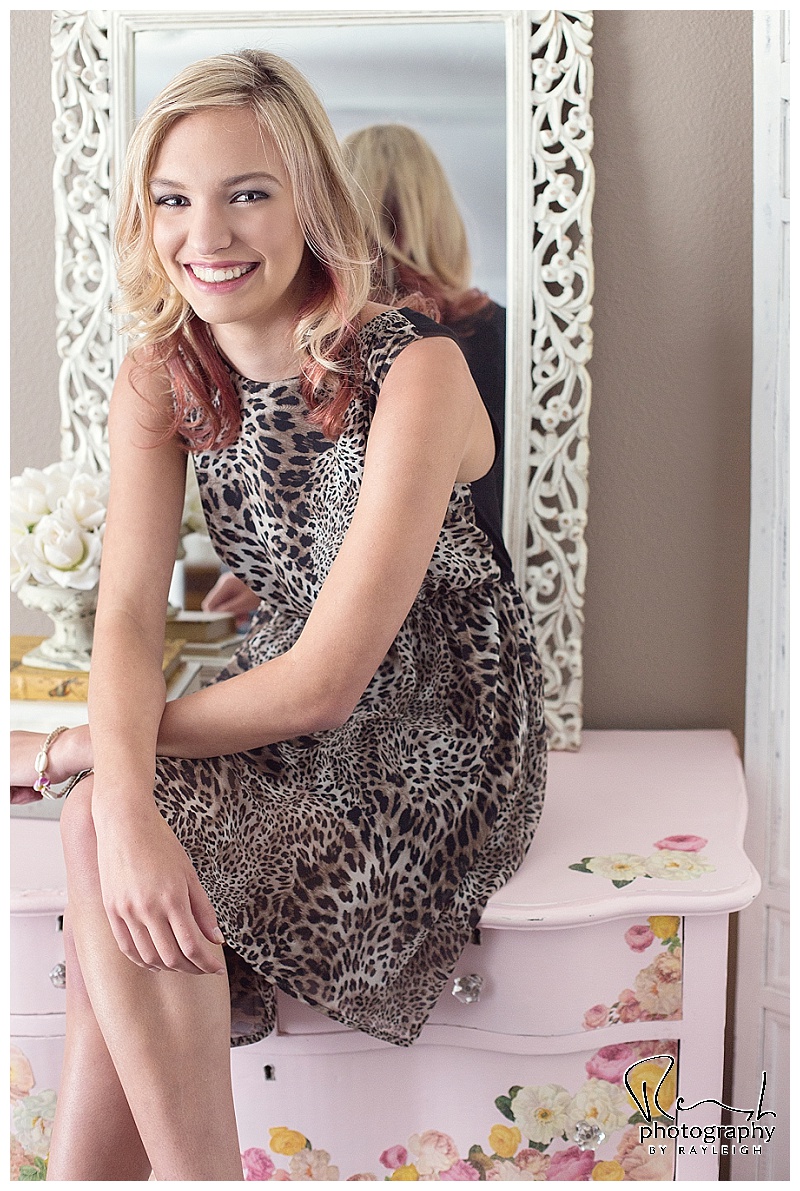